Over a year ago, Trinity Health relocated the services of their Hackley Hospital in Muskegon to their newly renovated campus just a few miles down the road. Since then, the EV Construction team has had the privilege of being a partner on the disposition project of the former hospital. Although, normally in the business of building (not demolishing) and renovating healthcare facilities, EV worked closely with the Trinity Health team on this unique project.

Hackley Hospital, named for Charles H. Hackley, a Muskegon lumberman and philanthropist who donated $220,000 for the original hospital construction, opened its doors on May 17, 1904. With 117 years of service to the community, the hospital is well remembered by those who delivered new life, lost a loved one or used its other services.

To that end, Trinity Health had a couple of main goals for this project. First, was to dismantle the building in a way that would still pay tribute to a community landmark. Second, the healthcare system needed to maintain operations in other buildings on the same property.

Starting out, crews spent months strategically unraveling the many complex utilities, building systems and services that had been interconnected on the Hackley campus for over a century. Over fifty workers spent months performing asbestos abatement to ensure all contamination was eradicated. Upon completion, the 350,000-SF, aged and cost-prohibitive hospital structure was removed, leaving the newer emergency department wing (now an urgent care under Hackley Community Care), Trinity’s behavioral health building and Trinity’s professional services building intact. All buildings formerly relied on the connections from the main hospital but are now self-sufficient facilities. Throughout the winter months, crews brought in 70,000 cubic feet of sand to fill the hole that had been the building foot print that remained after demolition. As part of the final steps, crews constructed a service road for the Trinity properties, and integrated a new irrigation system for the campus.

Trinity parceled out the property where the Hackley Hospital once stood and generously donated the land to Muskegon Public Schools for construction of the Charles Hackley Middle School. A separate construction team is already active on that site, pouring foundations for the new Middle School. 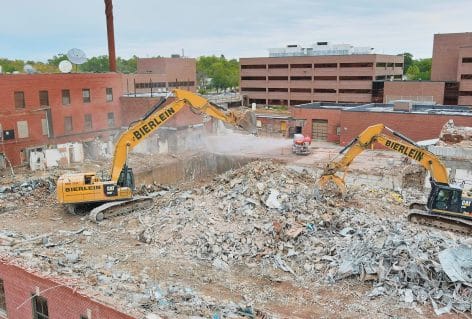